Just as I’m thinking I’ve read it all, Ayobami Adebayo comes to move me with this heart-splitting, warm story of love between these two humans whose decision to be a couple came with so much they hadn’t bargained for. Yejide and Akin are married and their quest for children will lead their marriage through many twists and turns that will leave you feeling empathetic, shocked, angry and saddened by some of the things they have to go through and endure and truths that will be revealed later at a cost to their union.

If there are any lessons to be learned from this beautiful novel, (which are many by the way because the story is full of lessons), it’s that:

1. You must always be truthful to your loved ones no matter the circumstances.

A relationship cannot stand on a lie. Any relationship built around a lie will one day crumble when the truth is discovered. So why not just tell the truth from the start? If you’re afraid your truth will hurt your loved ones or cause them to leave you, in my opinion, better they know and leave so you know you’re on your own than to feed them a lie to stay with you. Because in the end, if ever they find out, things won’t be rosy at all. Who knows? They probably might stay after all, even after learning the real truth. So instead of deceiving them into staying, let them know what’s up!

Moomi said it all in her thousand and one proverbs (most of which were jabs meant for Yejide, of course, without her knowing the real deal was with her son (rolls eyes)):

African families and societies are fond of too much meddling when it comes to children in a marriage that it calls for concern. And the obvious point of attack is always, always the woman. It’s as if they forget it takes two to make a baby.

I have never felt sorry for anyone the way I felt for Yejide in this love-tragedy of a story. Imagine being pestered day and night from yours and your in-laws family to give birth after four years of marriage. You’re trying everything from sitting in hot water to trips to herbalists and hospitals, even Mountains of Jaw-dropping Miracles, only to find out later your husband is the one with the problem. And to make matters worse, he’s been aware of it since day one. Yet he chose to actively lie to you about it and conspired with his younger brother to seduce you so you get pregnant for him to take credit for it. All this to save his own face while yours is the rag his family wipe their arses with because apparently you’re barren and useless and he needs to take a second wife but you’re using your witchcraft to stop him from doing so! Jeez! Can you imagine?

I did not and do not sympathize with Akin in any way in this story because he did Yejide dirty. Very dirty, for someone he claimed he loved. He rode on society’s bias and successfully, conveniently used Yejide as a shield for his own shortcomings, knowing very well that in this our stereotypical African society, no one would think to question him (the man) about the reason for their childlessness. And he was right. Yejide took all the blows left, right, center, she almost went mad with grief and want for a child to the point where it affected her mentally, her body responding to her want with pseudocyesis (it was my saddest part to read: I cried) and yet Akin never for once thought to tell his wife the truth, to ease her pain and burden. That for me was the epitome of betrayal and selfishness and it was really heartbreaking to read and to know that this could be some African woman’s reality somewhere, right now.

In the end, let’s desist from pressuring married couples with childbirth. The decision is up to them not you as mother, sister, counselor, spiritual advisor, friend, colleague, in-law, whatever. And in the end, you never really know what people are facing in their marriages. Child-bearing is not the only reason why people marry and it’s not the basis of a woman’s worth or value in a marriage. So leave married women without child(ren) alone. Stop asking when couples will give birth. It’s none of your business, really. Why don’t you channel that energy into making your own life better?

3. I think people should be allowed to grieve for the things that matter to them in their own way and space of time.

When Yejide began losing the children she had with Dotun (Akin’s brother) to Sickle Cell Disease, it was amazing how almost everyone was quick to tell her (by way of comforting her) to forget about the dead children as she would soon give birth to more and other children. And this really irritated me as much as it did Yejide. (Because I was like so, your point is?…)

Just because it is a child that died doesn’t mean he or she is not worthy of being mourned or that the sense or feeling of loss isn’t as deep as that of an adult. Mother’s go through a lot to carry their children before birthing them, so you should know losing them is a big deal, matter of fact, a huge blow and they should be allowed to mourn and grieve for as long as they wish to. They shouldn’t be told (or expected) to just brush their deaths aside as though their existence were too short to have mattered or hold meaning.

4. Also, we must never lose hope or give up easily no matter how bad things are or have been in the past.

After losing two of her children to sickle cell, Yejide became careless with her third child who was also sickling positive. In her mind she had already condemned her to death like her two other siblings before her and so she never really took proper care of Rotimi nor cherished her. She didn’t want to have hope in her only to lose her in the blink of an eye. And that’s where she was wrong (not that she could be blamed), because as God and fate would have it, it is she, this last child, who survives through her crisis and it is her name that is translated as the title of the book: Rotimi — meaning “Stay with me.” 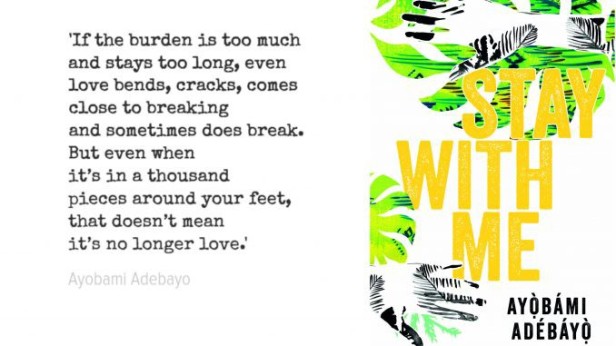 There are many important themes the novel touches on including fertility, polygamy, sex life, family, marriage, betrayal, deception, love, mental health, politics and Nigeria’s journey with military governance, and a whole lot. It’s such a wonderful book for a debut novel and I totally, totally enjoyed reading it. Big ups to the author, Ayobami, once again for telling such a human story in the most humanly captivating way possible and taking your readers on a ride with you. The characters in the story are so real and well-developed they stay with you long after you’ve finished the book. I highly recommend this read & I’d rate this a solid 4.5 out of 5.

Thank you so much for reading. If you’ve read Stay With Me, let me know what you thought of it in the comments below. If you haven’t read it yet and you like what you see, well you might want to consider adding it to your To Be Read list.

Find book on Amazon or you can check with your local bookstore to see if they have it in stock.

Catch you soon with my next review.

Current Reads: The Mothers by Brit Bennett & Breasts and Eggs by Mieko Kawakami.

12 thoughts on “Review: Stay With Me”

This site uses Akismet to reduce spam. Learn how your comment data is processed.